Windmill by the sea in Tinos
This is an Instant Booking. The host agreed to automatically accept booking requests. Once your payment is processed, your booking is confirmed.
Entire place • Tinos
Rated Exceptional 5 (1 review)
Wi-Fi • Kitchen • Essentials 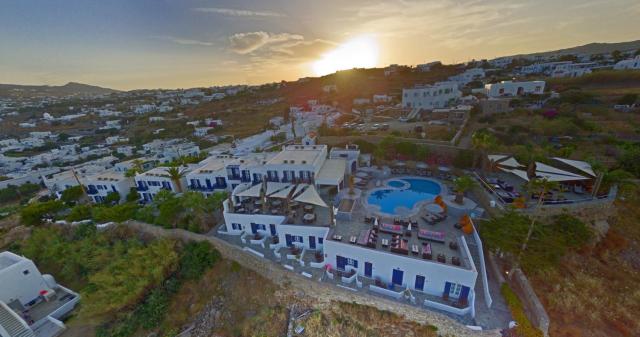 Elysium Hotel ****
Gay hotels: these hotels are “gay only” or “male only” and accept gay guests only (or mostly). Also called “straight-friendly” or “hetero-friendly” sometimes.
This is an Instant Booking. The host agreed to automatically accept booking requests. Once your payment is processed, your booking is confirmed.
Hotel room • Mykonos
Hot tub • Parking
Rated Exceptional 4.92 (2 reviews)
Hot tub • Parking 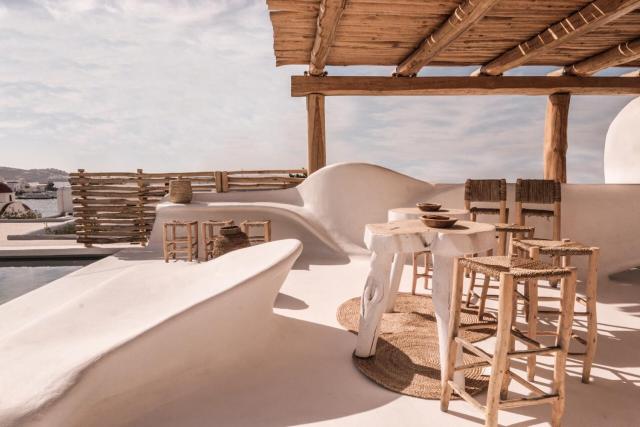 MyCocoon Hostel
Location, services, amenities, rates, overall good reputation: these hotels are a good fit for LGBTQ travelers. We haven’t been able to vet their welcoming attitude and acceptance of the LGBTQ community yet.
This is an Instant Booking. The host agreed to automatically accept booking requests. Once your payment is processed, your booking is confirmed.
Hotel room • Mykonos
Parking
Rated Exceptional 4.88 (2 reviews)
Parking
New: Other guests will be staying in this hotel/the city soon.Book and connect to explore the city together. ?
Booking with misterb&b unlocks the ability to connect with guests staying within your dates at the same hotel or destination city.

Ninety nautical miles off the coast of Athens, in the crystalline Aegean Sea, sits magical and mythical Mykonos - a place famous for its iconic architecture, society connections, agrestic charm, and libertine pulse. Half a century ago, globe-trotting gay men started flocking to the island's white-sandy shores. Today, the 12-mile-wide outcrop is an LGBTQ mecca.

An unabashed tourist haven, Mykonos is awash with seaside cafes, trendy restaurants, and dance hall clubs - all of which are gay-welcoming. Jackie O' and Babylon, side-by-side clubs in the center of town, are world-renowned gay hotspots. Just down the street, Porta and Piano Bar are perfect for people-gazing and drag glamour.

The club at Super Paradise Beach, with its half-moon of massive speakers, throbs all day and well into the night. But don't confuse Paradise Beach with Super Paradise Beach. The former is best described as a "Girls Gone Wild" boot camp for day-tripping cruisers, while the latter is a Byron-esque bacchanal for men seeking men.

Confusingly, the only city on the island is also named Mykonos, but the locals call it 'Chora'. Spend an afternoon perusing luxury boutiques and local artisan shops. To refuel, enjoy a gyro and glass of Peloponnesian chardonnay at Sakis or Souvlaki Story. For something more formal, head to Interni or an eatery in the Little Venice area.

Foodies should also find Kiki's on the outskirts of town. Dubbed "the world's most idyllic seaside restaurant," Kiki's specializes in delectable, simple rustic dishes. What the restaurant lacks in polish, it makes up for in flavor and authenticity. But be prepared to wait, word has already gotten around that this place means business when it comes to serving top-notch cuisine. In any case, the wait will be worth it.

Elia Beach is the island's most popular sunbathing spot for gay men and nudists alike. During peak season, it's a crush of glistening hard bodies. If, however, Elia is too crowded for your taste, hop next door to Agrari Beach, which offers a slightly tamer vibe.

Once you’ve had your fix of vitamin D, tour the open-air archeology museum at Delos. It's the storied birthplace of Apollo and the ideal backdrop for an Instagram vacation story you can share with Great Aunt Rosie. After you've marveled over ancient marble, make your way to the iconic, thatched-roof windmills that date back to the 16th century.

Are you looking for a gay-friendly home-away-from-home in Mykonos? Why not lock in a stay with a local misterb&b host? Not only will you enjoy the best of gay hospitality, but you may even make a new friend along the way. Otherwise if you are traveling in numbers and you’d prefer a little bit of privacy, you can book an entire misterb&b apartment for you and your friends.

Those looking for a hotel in Mykonos will not be disappointed, with several catering exclusively to the LGBTQ community, including the Elysium Hotel. Here you can enjoy many luxury amenities including a fully-equipped gym and a communal spa - bliss. Whether you go for a gay-friendly hotel in Mykonos, or you have your sights set on a misterb&b, you’re sure to have a great gaycation on this Greek island.