Hilton Imperial Dubrovnik *****
Location, services, amenities, rates, overall good reputation: these hotels are a good fit for LGBTQ travelers. We haven’t been able to vet their welcoming attitude and acceptance of the LGBTQ community yet.
This is an Instant Booking. The host agreed to automatically accept booking requests. Once your payment is processed, your booking is confirmed.
Hotel room • Dubrovnik
Hot tub • Parking
Rated Exceptional 5 (2 reviews)
Hot tub • Parking 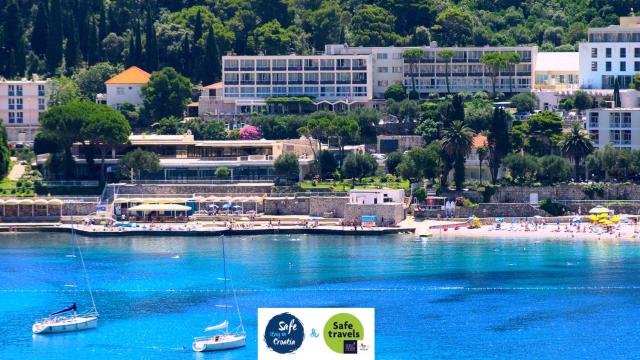 Hotel Adriatic **
Location, services, amenities, rates, overall good reputation: these hotels are a good fit for LGBTQ travelers. We haven’t been able to vet their welcoming attitude and acceptance of the LGBTQ community yet.
This is an Instant Booking. The host agreed to automatically accept booking requests. Once your payment is processed, your booking is confirmed.
Hotel room • Dubrovnik
Parking
Rated Very Good 4.24 (1 review)
Parking

Often referred to as the ‘Pearl of the Adriatic’, Dubrovnik is a walled city on the Croatian coast that has swiftly become a hotspot for gay cruises and gay travel in general. Once you land in this UNESCO World Heritage Site, you’ll instantly fall in love with its romantic cobblestone streets, pristine pebble beaches, and mild Mediterranean climate. Dubrovnik never fails to captivate travelers with a passion for history, culture, and beauty.

Before sharing the best gay area Dubrovnik, it’s important to note that the Catholic faith still plays a major role in contemporary Croatian culture. That said, homosexual activity has been legal since 1977, and the country recently voted to allow gay civil unions. LGBTQ discrimination has also been banned in Croatia since 2003. As Dubrovnik is such a touristic city, it is far more liberal than other parts of Croatia including the countryside, so there should be no issues on a gay Dubrovnik journey.

As far as gay-friendly destinations are concerned, your best bet is to hop on a boat and visit the nearby Lokrum Nudist Beach. On this fabulous island, you can feel totally uninhibited as you splash around in the crystal clear Mediterranean waters and sunbathe with fellow pleasure seekers. Before leaving, don’t forget to check out the island’s beautifully-maintained Botanical Garden and historic monastery. If you’re looking for more mainstream beaches, check out Lapad and Banje on your Dubrovnik vacation.

For those interested in bar-hopping in Dubrovnik, start your tour around the touristic Stradun area, and explore the surrounding back alleys for small pubs and entertainment venues. There aren’t really dedicated gay clubbing areas here, but one of the more popular clubs known to the gay community is Troubadour at Bunićeva poljana 2. Those interested will enjoy the breathtaking views of Lokrum Island at the cliffside Buža Bar. For a more intimate dining experience, check out Bistro Izvor just outside of Dubrovnik in the charming village of Rožat.

Unfortunately, there’s still no dedicated Pride Parade in Dubrovnik, but there are many fantastic annual events that tourists can appreciate. Undoubtedly, the most popular event in Dubrovnik is the fireworks-filled Summer Festival, which runs from July through to August. Other popular festivities include the Classical Music Festival at the end of summer, the International Festival of Jams & Marmalades in October, and the Winter Festival from December until January.

Are you looking for the best place to stay for a gay Dubrovnik vacay? Whether you want an intimate experience in a luxurious gay hotel Dubrovnik, or an apartment better suited for big parties, you’ll find a superb list of LGBTQ-approved accommodation on misterb&b. Don’t forget to look through all of misterb&b’s thoroughly vetted gay accommodation Dubrovnik before booking your trip, and enjoy a gaycation to the Pearl of the Adriatic.