Santorini, the next big Gay Honeymoon Destination
by misterb&b 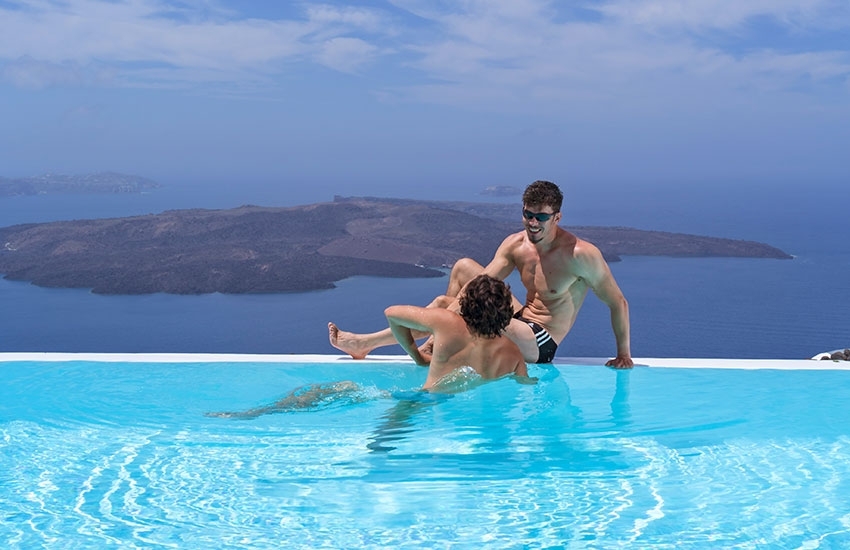 Gay travel in Santorini is not yet as developped as it is in Mykonos. Far from the vibrant nightlife and gay beaches of its Cyclades island neighbor, Santorini yet emerges as a romantic destination, an upscale destination, the ideal setting to enjoy your gay honeymoon.

With its steep cliffs, witnesses of the cataclysm that gave birth to this jewel of the Aegean Sea, and its pristine white villages clinging to the mountainside, Santorini is an icon of the Mediterranean.

Open to tourists from all over the world, Santorini is increasingly welcoming to the gay & lesbian traveller. And if there are few gay venues, there are some spots where gay travelers can meet, such as the Vlyhada and Koloumpos gay beaches or the Tropical 'bar in Fira.

With its luxurious hotels, the amazing views to the volcano and its insolent beauty, Santorini is the perfect setting for a gay wedding ceremony or a honeymoon trip.

To present the gay aspect of Santorini and promote it worldwide, the team of Detsetters called photographer Christos Drazos, one of the best hotel and travel photographers in Europe. Here is the result of their collaboration. Who'll be your next misterb&b host in Firá?

Global Pride 2020: Together We Are Stronger
Reactivate my account
Book your next gay trip with misterb&b and be welcomed in 1 million LGBTQ-friendly accommodations in 200 countries Search now
By using this website, you consent to the use of cookies for analytics purposes