Hotel Palazzo Zichy Budapest ****
Location, services, amenities, rates, overall good reputation: these hotels are a good fit for LGBTQ travelers. We haven’t been able to vet their welcoming attitude and acceptance of the LGBTQ community yet.
This is an Instant Booking. The host agreed to automatically accept booking requests. Once your payment is processed, your booking is confirmed.
Hotel room • Budapest
Parking
Rated Exceptional 5 (1 review)
Parking 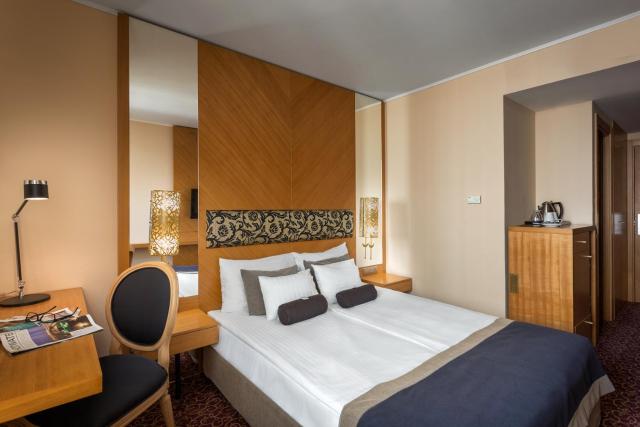 Marmara Hotel Budapest ****
Location, services, amenities, rates, overall good reputation: these hotels are a good fit for LGBTQ travelers. We haven’t been able to vet their welcoming attitude and acceptance of the LGBTQ community yet.
This is an Instant Booking. The host agreed to automatically accept booking requests. Once your payment is processed, your booking is confirmed.
Hotel room • Budapest
Parking
Rated Wonderful 4.56 (1 review)
Parking

Budapest, the capital of Hungary, is located on the banks of the Danube River. It has been a center of Eastern European art and culture for nearly 500 years. With a population of 3.3 million, it is the tenth largest city in the European Union.

With an eclectic mix of art, culture, and nightlife, Budapest has something for everyone. Some enjoy spending an afternoon exploring the UNESCO World Heritage site along the banks of the Danube, while others may like admiring masterpieces at the Fine Arts Museum. Those who like history will appreciate St. Stephen's Basilica and the Dohany Street Synagogue. And after the sun goes down, the uniquely Budapestian ruin bars will entrance almost anyone for the night.

Budapest is home to about a dozen gay hotspots including bars, nightclubs, and saunas. It doesn't have any specific gay neighborhood per se; gathering points are located all over the city, so you should have a destination in mind before you head out for the evening. Most gay clubs and bars are located in the eastern half of the city, in historical Pest. You can start your afternoon at one of Budapest’s famous gay saunas. Magnum Sauna is a mainstay of gay Budapest, and features special events every Friday and Saturday. In addition to being a sauna, Magnum offers drinks, massages, and showers for two.

If you are looking to grab a drink with locals in a more relaxed environment, we recommend heading to Funny Carrot or Habrolo. Then when you're ready to dance, make a beeline for AlterEgo Club. AlterEgo is one of several venues where you can catch a drag show and party the night away. The famous gay pizza shop, Club 93 Pizzeria, is the perfect spot to recuperate the next day, before heading back out on the town. In nutshell, gay Budapest has something to offer everyone, no matter your style.

Pride is one of the highlights on the calendar around the globe. Budapest Gay Pride Festival usually takes place on the first Saturday in July, with the main event being the incredible parade along Andrassy Avenue. Attendance is usually high, and party spirits even higher. In addition to the parade, the gay community in Budapest celebrates with parties and a renowned LGBT film festival.

If you are seeking gay accommodation in Budapest, you’ll be pleased to know there are plenty of options. You can book a misterb&b to make some local connections who might be able to show you around the city. Depending on the size of your group, it might be a good idea to alternatively rent an entire misterb&b apartment. That way, you can have plenty of space to relax when you aren't out enjoying the city! misterb&b also offers the most updated list of gay and gay-friendly hotels in Budapest, with anything from luxury suites to budget hostels.