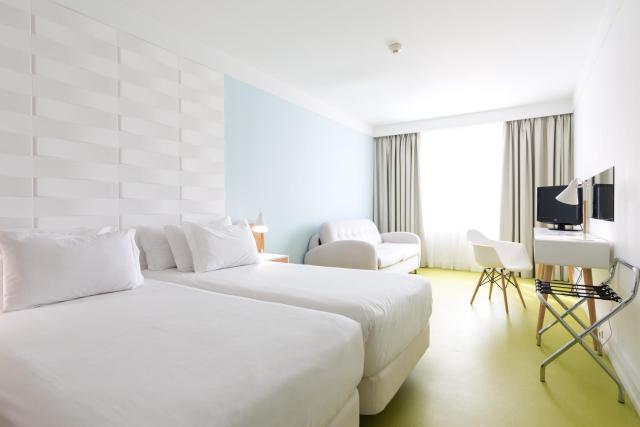 Legendary Porto Hotel ***
Location, services, amenities, rates, overall good reputation: these hotels are a good fit for LGBTQ travelers. We haven’t been able to vet their welcoming attitude and acceptance of the LGBTQ community yet.
This is an Instant Booking. The host agreed to automatically accept booking requests. Once your payment is processed, your booking is confirmed.
Hotel room • Porto
Parking
Rated Very Good 4.2 (1 review)
Parking
New: Other guests will be staying in the city soon.Book and connect to explore the city together. ?
Booking with misterb&b unlocks the ability to connect with guests staying within your dates at the same hotel or destination city.

Hotel Mercure Porto Gaia ****
Location, services, amenities, rates, overall good reputation: these hotels are a good fit for LGBTQ travelers. We haven’t been able to vet their welcoming attitude and acceptance of the LGBTQ community yet.
This is an Instant Booking. The host agreed to automatically accept booking requests. Once your payment is processed, your booking is confirmed.
Hotel room • Vila Nova de Gaia
Parking
Rated Excellent 4.3 (1 review)
Parking

DA'Home - Cedofeita Art Studio
This is an Instant Booking. The host agreed to automatically accept booking requests. Once your payment is processed, your booking is confirmed.
Entire place • Porto
Rated Exceptional 5 (1 review)

Teeming with rich, historical vibrations and a legendary nightlife, the city of Porto is guaranteed to be an amazing travel destination for any tourist. However, gay Porto is more welcoming and happening than ever before! Porto is considered to be a top destination LGBTQ travelers, with Portgual proudly decrimininalizing homosexuality as far back as 1982. That means that Porto Gay Life has been thriving for nearly fourty years! From the Crystal Palace Gardens to Liberdade Square, there is a sense of Porto Pride that looms in Portugal’s air everywhere you go.

With a metropolitan area population of approximately two million people, this city literally has something in it for everyone. Even though the entire city of Porto is gay-friendly, there are a few areas which are urban hotspots for individuals in the LGBTQ community. One of the most famous LGBTQ hubs in the city is called the Ribeira District. It is in the middle of an array of hotels and cafes that both tourists and locals absolutely adore. In addition to the Ribeira District, the Sao Bento Train station is also a major intersection of the Porto Gay Scene. In this part of the city, nightlife, cafes, and gay-friendly hotels are extremely prominent. One really cannot go wrong with these two LGBTQ epicenters of Porto.

In terms of LGBTQ celebrations in Porto, the city hosts its colorful Pride Parade at the end of July each year. In addition, there is also an annual LGBTQ Film Festival, which takes place over the summer months. Clearly, there will not be a shortage of fun in Porto when you visit!

Looking to make some new friends? Staying with a local misterb&b host is a surefire way to make new acquaintances, while at the same time laying your head on some cozy bedding. If you happen to be traveling with a party, you can even book an entire apartment on misterb&b. Hotel Mercure Porto Centro is one of the finest Gay Accommodation Porto establishments the city has to offer, and what’s even better is that it is located in the most LGBTQ friendly district of Porto.

When enjoying the Porto gay life, there are numerous hotels that make accommodation almost as pleasurable as the outside activities gay Porto has to offer. Next to Mercure Porto, Eurostars Porto Centro also offers one of the most relaxing lodging experiences in the city. Not to mention, both of these locations are just a few miles from the Ribeira District and Sao Bento Train Station. So, what are you waiting for? Porto is already waiting for you!