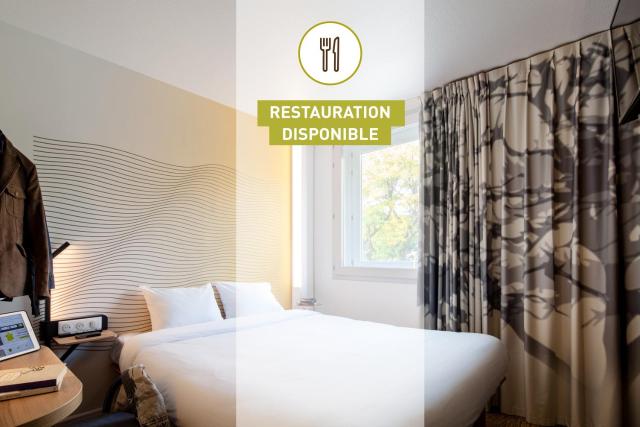 B&B Hôtel Marseille Centre La Joliette ***
Location, services, amenities, rates, overall good reputation: these hotels are a good fit for LGBTQ travelers. We haven’t been able to vet their welcoming attitude and acceptance of the LGBTQ community yet.
This is an Instant Booking. The host agreed to automatically accept booking requests. Once your payment is processed, your booking is confirmed.
Hotel room • Marseille
Rated Wonderful 4.62 (2 reviews) AC Hotel by Marriott Marseille Prado Vélodrome ****
Location, services, amenities, rates, overall good reputation: these hotels are a good fit for LGBTQ travelers. We haven’t been able to vet their welcoming attitude and acceptance of the LGBTQ community yet.
This is an Instant Booking. The host agreed to automatically accept booking requests. Once your payment is processed, your booking is confirmed.
Hotel room • Marseille
Rated Exceptional 4.76 (1 review)

Marseille is a place of culture as well as sand and sea, and it is the second-largest city in France. It is also considered to be among France’s oldest gay destinations. With approximately two million people, it is the third largest urban area in the country. It takes pride in its official status of being the 'sunniest major city in France’, earnt through having nearly 3,000 hours of uninterrupted sunshine for tourists and residents alike. The dreamy climate sets the perfect setting for exploring this Provence region, from Le Vieux Port of Marseille (known as the Old Port) to the breathtaking water views and hiking trails.

Since 2013, France has legally recognized same-sex marriage, making Marseille, among other destinations in the country, a breeze for gay and lesbian travelers. Just four hours by train from Paris, and well connected through an airport, Marseille is an extremely accessible destination for any type of gaycation.

Marseille is unique in that it does not have an area that is defined as strictly gay. Instead there is an eclectic area of gay entertainment establishments to choose from, which are scattered around the city. Many still consider Marseille to have a more conservative feel when it comes to public displays of gay affection. That said, the gay lifestyle is embraced and celebrated with Marseille Pride, which is held every year in early July. The starting point for any gay adventure should be the Old Port of Marseille, which is known as the Vieux Port and is considered as the official city center of Marseille.

The gay life of Marseille is not only bustling, it is a predominant fixture of the gay Marseille nightlife. There is a wide variety of gay bars Marseille has to offer, which are suited to various tastes. A more laid-back gay experience can be found at L’Annexe, which has DJ nights every weekend and is located near the city’s metro station around the Old Port area. A younger crowd can be found at The New Can Can, which hosts themed events and live music. Saturday night at this bar is when most of the gay crowd comes to party.

If you’re into a more serious gay scene, then the gay cruise bar, Le Trash, is a suitable choice as it hosts themed nights throughout the week, including a naked party every Sunday. Le Klub in the Canebiere district also offers the same gay scene, but it has private cabins and showers. Cargo is also a popular gay sauna and men’s club in Marseille, which features a Turkish bath, steam rooms, a Finnish sauna, and gay recreation areas. It is open all week, so be sure to stop by should you wish to explore your kinky side in gay Marseille.

Located close to the Old Port, The Grand Hotel Beauvau is in the heart of most of the main restaurants and shops of Marseille. It also features a gay sauna and a gay flamingo dance club. The Grand Tonic Hotel is a bit smaller with less than 60 rooms, and it is not far from the Opera House of Marseille. What makes this gay hotel a convenient choice is the fact that it is also within easy reach of most of the gay clubs and other nightlife options in Marseille. As far as gay accommodation Marseille style goes, The Hotel Festival offers the most intimate accommodation experience, and is extremely gay-friendly with a spa and just 14 rooms.

If you want to enjoy the abundance of sun right away, then one of the oldest nude beaches in France, Mont Rose, should definitely be included in your itinerary for gay Marseille. It is a welcoming place for gays to languish along the rocky coast, and take in the Instagram-worthy sunsets. A quick bus ride will get you to the area, and then it’s just a short walk to the beach, near Avenue de la Madrague de Montredon. If you want to explore something more adventurous, then the Calanques inlets are great for hiking and are located south of Marseille, at La Madrague on the peninsula area. Closer to Marseille is a loop-hike that begins at the Chateau-Gombert in the city and follows the foothills of Chaine de l’Etoile.

So whether you like the idea of dancing the night away in one of the many gay clubs of Marseille, or you’d rather get your dose of sun on a dreamy gay beach, you’re sure to be charmed by the beauty and individuality of gay Marseille. See you down south!