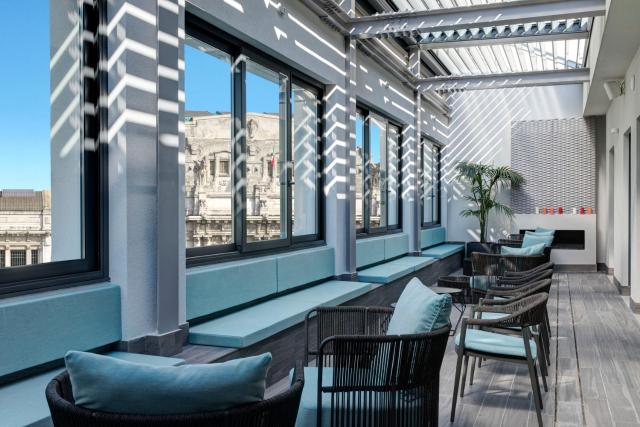 iQ Hotel Milano ****
Location, services, amenities, rates, overall good reputation: these hotels are a good fit for LGBTQ travelers. We haven’t been able to vet their welcoming attitude and acceptance of the LGBTQ community yet.
This is an Instant Booking. The host agreed to automatically accept booking requests. Once your payment is processed, your booking is confirmed.
Hotel room • Milan
Hot tub • Parking
Rated Exceptional 5 (3 reviews)
Hot tub • Parking

NH Collection Porta Nuova ****
Location, services, amenities, rates, overall good reputation: these hotels are a good fit for LGBTQ travelers. We haven’t been able to vet their welcoming attitude and acceptance of the LGBTQ community yet.
This is an Instant Booking. The host agreed to automatically accept booking requests. Once your payment is processed, your booking is confirmed.
Hotel room • Milan
Parking
Rated Exceptional 4.96 (2 reviews)
Parking

Milan is an Italian city that's known internationally for its immensely stylish vibe. If you're a fan of stunning architecture, rich culture and chic threads abound, then this may be the European metropolis for you. There are also many widely known attractions in this capital of Lombardy. Several examples of these are the Teatro alla Scala, the Duomo di Milano and, last but certainly not least, the Sforzesco Castle. Gays tend to have few issues in Milan, with the city being home to an abundance of establishments that eagerly embrace the gay community. It's simple for gays to find clubs, lounges and bars that make them feel easily welcome.

Gay Milan and beyond

If you want to revel in the joys of gay Milan, you should head to the Porta Venezia part of the city. People often refer to Porta Venezia as the city's gay district, and this is the first area you should consider in terms of gay accommodation Milan. If you want to check out all of the district's action, head to Via Lecco. Gays who wish to enjoy some amazing drinks often head to Leccomilano, which is a fine spot for people who wish to socialize and take it easy for a while.

Other favorite bars in the district include Eppol Milan, Red Bar and MONO Bar. If you're in the mood for a particularly chic setting, you should stop by Blanco, where you can settle in with a delectable cocktail for the evening.

When you need a gay hotel Milan travelers can count on, you should have zero issues. There is an abundance of accommodation options on hand to gay travelers, who wish to feel both secure and welcome. Popular hotels with gay travelers include Hotel Berna, Ibis Milano Centro and the Hotel Garda

Hotel Berna is just steps away from many of the ‘institution-status’ bars for the local gay community. The hotel is also known for its highly competitive guest room rates. If you want to be right by a plentitude of bars, shops and dining establishments in general, the Ibis Milano Centro is your best bet as it’s in the heart of all the action.

The Hotel Garda is a tradition among gay visitors to the city. That's why gay travelers book rooms at the hotel time and time again. What’s even better is that it's not far at all from Porta Venezia, and all of its options. It's also a relatively brief stroll to the bustling Central Station, making transport to and from this hotel super simple.