The Grove Resort & Water Park Orlando ****
Location, services, amenities, rates, overall good reputation: these hotels are a good fit for LGBTQ travelers. We haven’t been able to vet their welcoming attitude and acceptance of the LGBTQ community yet.
This is an Instant Booking. The host agreed to automatically accept booking requests. Once your payment is processed, your booking is confirmed.
Hotel room • Orlando
Hot tub • Parking
Rated Exceptional 4.88 (1 review)
Hot tub • Parking 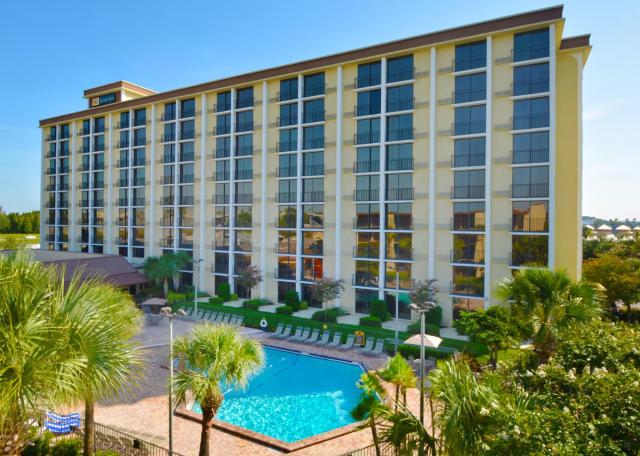 Rosen Inn Closest to Universal ***
Location, services, amenities, rates, overall good reputation: these hotels are a good fit for LGBTQ travelers. We haven’t been able to vet their welcoming attitude and acceptance of the LGBTQ community yet.
This is an Instant Booking. The host agreed to automatically accept booking requests. Once your payment is processed, your booking is confirmed.
Hotel room • Orlando
Parking
Rated Exceptional 4.76 (1 review)
Parking

Smack-bang in the center of Florida, Orlando is the kind of place that appeals to everyone. The home of Disney and Universal studios, Orlando has been a top travel destination among all age groups for nearly five decades. With such a broad international appeal and openness to everyone, it’s only natural that Orlando welcomes LGBTQ visitors with open arms!

The Orlando Milk District prides itself on being a progressive, forward-thinking destination for gay Orlando visitors who want to experience a bit of everything. It's the best gay area Orlando has to offer, and should definitely feature in your itinerary. Sample cuisine from around the world, check out works from many talented artists, and experience the lively gay bars Orlando has to offer!

Bust some moves at the Savoy Orlando club. Play some pool or strip down to your shorts at Barcodes Orlando’s bi-weekly boxer nights. Get straight to the point and have a beer or cocktail at Hank’s. The gay bars Orlando boasts are diverse and refreshing. A number of bars will be found around Rosalind Avenue and Gertrude’s Walk, and while not all of these bars are specifically geared towards LGBTQ patrons, many LGBTQ people still feel comfortable here. If you’re hungry and you like the idea of chilling for a bit, grab a bite at Hamburger Mary's. Head on a Tuesday, and Miss Sammy and Carol Lee will guide you through Twisted Sisters bingo.

Outside the gay area Orlando prides itself on, gay events and establishments are abundant. Bars aren’t the only attraction for gay travelers visiting Orlando. For nearly thirty years, Disney has hosted their five to seven-day long Gay Days, where over 150,000 gay people come from all over the world to attend. At Gay Days, gay travelers and allies are clad in red shirts to express solidarity.

The Plaza Live theatre also welcomes a number of gay bands, artists, and acts to enjoy during their special events’ calendar. The two-week Fringe Festival is also a must for anyone who wants to take part in “Orlando’s most unique cultural experience.” Usually taking place in mid-May, the Fringe Festival has been going strong for 28 years, and is considered a treasured piece of living history.

For gay Orlando visitors, there are plenty of other things to do in the city. See some snakes and watch burly dudes wrestle gators at Gatorland. Breathe in some fresh air, and see an array of tropical and subtropical plants at the Harry P. Leu Gardens. With 50 acres of foliage and ponds, it is easy to spend an entire afternoon in this urban oasis. Alternatively, step back a century and enjoy the old-time rides and carnival attractions at Old Town. A number of water parks and marine-life attractions are also available to those who want to get wet and soak up some rays.

At the end of the day, everyone needs a place to rest their head, and Parliament House is arguably the premier option for gay travelers. Featuring comfortable, affordable accommodation, seven bars, theme nights, a dance floor, and a restaurant, this gay-friendly hotel has it all. If you’d rather stay somewhere else for your gaycation to Florida, you can rest assured that you will find the best gay accommodation Orlando has to offer through misterb&b. Choose from private rooms with gay hosts, entire gay apartments, or even a dreamy gay or gay-friendly hotel. Whichever option you go for, the gay accommodation Orlando provides won’t leave you disappointed.