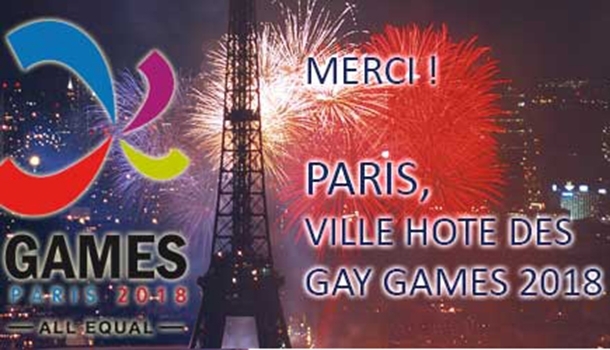 After 18 months of hard work, the Paris 2018 team proudly comes back home from Cleveland : they have just won the bid to organize the 2018 Gay Games, the 10th edition of an event launched in 1982 in San Francisco.

Launched in February 2012 within the FSGL, the French Gay and Lesbian Sports Federation, the idea of a Paris bid quickly found support in the Sports and Politics : Paris Mayor , France Prime Minister, Sports and Culture Ministers, the Ile De France Region, left-wing and right-wing politicians, the French Olympic Committee and fifteen sports federations. Paris 2018 team last night in Cleveland  right after its victory.

Save the date : 2018 Gay Games in Paris should be held from 4 to 12 August 2018. They could attract more than 15,000 participants in 36 disciplines. Open to everyone , they will be held in Paris and the region in places as diverse as Charléty stadium, Roland Garros stadium, the Meudon Forest, the Palais Omnisport de Paris Bercy arena, the Jean Bouin stadium and different pools.

The Gay Games village will be installed in front of the City Hall, right next to Le Marais, Paris gay district and the accreditation center at Carreau du Temple. The opening ceremony will take place at the Stade Jean Bouin , with an opening party planned at the Grand Palais. The closing ceremony and party will take place in the Parc de la Villette . Israeli group TYP, one of many support to the Paris candidacy.

In addition to the very intense sports program, organizers plan a large conference program and a long list of cultural events such as a ball on the Trocadero esplanade, fanfares cheerleaders and choirs performances, a LGBT Film festival, musical, theater or fashion events.

The Paris 2018 team has now four years to make this beautiful project become reality, with a single motto: #AllEqual