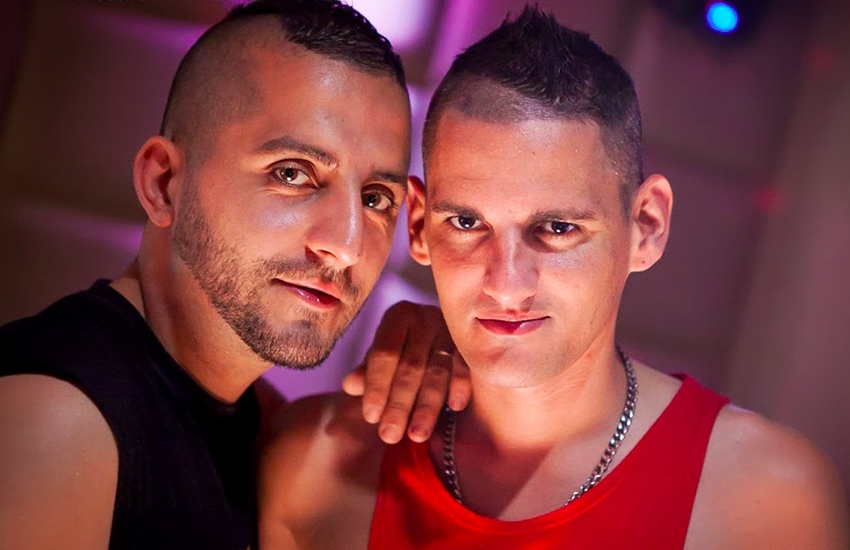 They’ve been behind all major gay parties on the French Riviera for almost 10 years now. Thibaud, 27, and Anthony, 33, managed to make their Rainbow Power parties the gay clubbing reference in the south of France. This summer, they see even bigger with the first ever Rainbow Power Summer Festival in Nice. Interview with a couple who participates in making Nice one of the most exciting gay destination in France. How long have you been together and how did you happen to organize gay parties on the Riviera?
Thibaud and Anthony: It's been almost 10 years since our paths crossed and that we’ve been  together. From the beginning of 2005, we began to organize small parties with friends at home, before going out, with two home cinema tinked and two or three spotlights, like all young people can do at home. But then these small parties began to attract friends of friends and creatures and iconic figures of Nice gay community. Some promoters even started to drop flyers a tour place to promote their events and we realized that organizing gay parties could be an occasional activity. We very easily found bars to host our first parties, we called them  "White Night Before Paradise", nothing serious though, always in a friendly spirit.

Then one day a club called The Klub offered us to organize parties on Thursday night, probably because they had nothing to lose by giving us a night that does not attract crowds. But these « 90Mega Sound » parties immediately became a must in Nice. After a year's residence and a dozen fully booked parties, another club came contacted us in 2008 . But this time it was Nice’s biggest club, the High Club. They also offered us a Thursday night to see if we were able to create an event the size of the club. We worked on creating an event that would gather the entire LGBT community to party and feel good. This is how the Rainbow Power party first edition was born. It attracted 1,300 people that night, a crowd nver seen before in Nice on a Thursday night.

You will soon celebrate 6 years of Rainbow Power. How do you feel when looking back?
T&A: This is an incredible adventure that began 6 years ago. Since the beginning, we created everything ourselves and still are, flyers, website, teasers, costumes, decor... We have learned so much over the years and a passion was born. This has brought us a lot in our professional and personal lives. We also met artists from all horizons, gogo dancers, drag queens, stilt walkers, fire eaters, singers, dancers etc.

We had the opportunity to work with guest such as Cascada, Tara McDonald, Guena LG, the Sister Queens, Cyril Cinelu, you name them all. But we also have fantastic memories with celebrities who where here as guest, like Julie Pietri, Patrick Juvet or Swedish group Gravitonas who came here to shoot Guena LG video during 2013 Easter Rainbow Power party.

We also did two tours, which took us from Paris to Barcelona via Dinard, Montpellier, Marseille ... with all our artists because we want to recreate the atmosphere of the party wherever we go. In six years, we have so far organized 102 parties since the creation of Rainbow Power, mostly in Nice, with an average of 1,200 people a night. What about this summer festival? Trying to compete with Barcelona Circuit Festival?
T&A : This is a long-standing project. We live on the French Riviera, the temple for parties and festivals in France. But no gay clubbing festival has ever been produced, it was natural for us to get the idea.

The first edition of our festival has not started yet but I know in advance that we will offer something different. Barcelona has its own energy, its own codes. Nice also has and we want to make the best of this city and its culture to create our own identity and provide a more user-friendly vision of clubbing and partying. We are convinced that Nice can be to France what Barcelona is to Spain.

What will the highlights be?
T&A: For this first edition, we concentrated everything on 6 parties, for which we will offer very different atmospheres and a great line-up of DJs such as : Guena LG, Phil Romano, Luiggi, Steven Redant and Danny Verde and our resident DJs Rémi Triton et Holly White,  with Rainbow Power Group parties: SCS! Scandalicious and Rainbow Power. We also wanted to incorporate a guest party. This year we invited the Papa Party, Eliad Cohen’s hit party. Each party will be a light and sound explosion with different settings each time and an avalanche of artists, including special guest, Italian pornstar Alex Marte. How do you judge Nice gay life?
T&A: There is so much to tell about it ! We’ve been living, goint out and working in the local gay community so it’s easy for us to tell that there is a real evolution, with a growing number of gay venues, events and parties. We have our LGBT center now, with various organisations. There’s a very big event coming, during next Nice Carnival in 2015, the first LGBT carnival., with huge tanks and plenty of events. And we want to greet all local organisations working on this project. We are very pleased that this will take place in winter. It’s another proof that it’s good living on the French Riviera all year long,  be it the climate or the culture.

You are currently in Malta, working on a new project. Can you tell us?
T&A: We don’t only have one but several projects. What we can say for now is that we will resume our tours, we will also release the Rainbow Power Group App in ealry June and we will focus on the Rainbow Power Summer Festival to make this event a success.

Which next big gay event will you attend?
T&A: This summer may be a little busy for us, but we will proabablu be at the Water Park day in Barcelona Circuit Festival and at La Démence in Brussels after the season.

The next Rainbow Power Event?
T&A: Sunday, June 8, at High Club in Nice, eve of a local bank holiday, we organize a Rainbow Power "Rock" party. Find all infos about Rainbow Power on their brand new www.rainbowpower.fr
The Rainbow Power Summer Festival will be held from July 17 to August 17 at High Club in Nice. 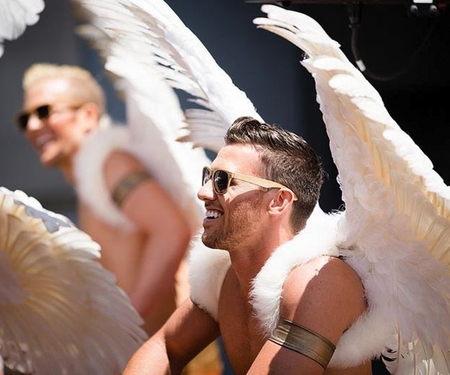 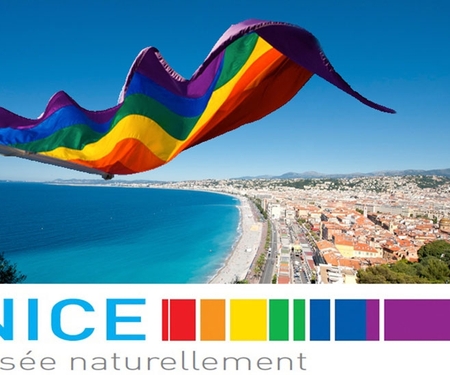 Nice opens up to gay travel
Reactivate my account
Book your next gay trip with misterb&b and be welcomed in 1 million LGBTQ-friendly accommodations in 200 countries Search now
By using this website, you consent to the use of cookies for analytics purposes